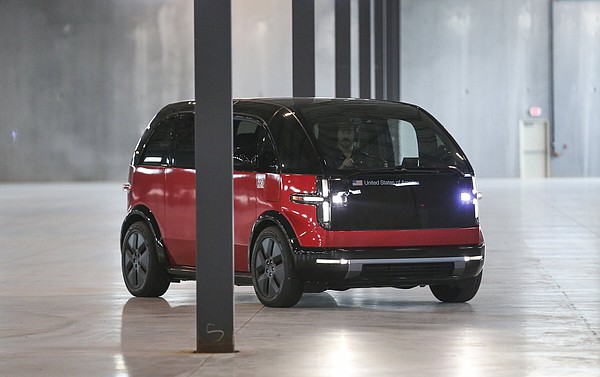 Walmart Inc.’s deal to buy electric vehicles from maker Canoo prohibits the startup from doing business with Amazon. It also gives Walmart an option to buy more than 20% of Canoo’s stock.

The terms appear in a document Canoo Inc. filed with the Securities and Exchange Commission on Wednesday, a day after the companies announced the deal and Canoo held its annual meeting of shareholders.

The five-year purchase agreement between the Bentonville-based retailer and the California-based electric vehicle startup calls for an initial order of 4,500 pod-like Lifestyle delivery vehicles from Canoo, with an option for Walmart to purchase up to to an additional 5,500.

Walmart said Tuesday the deal helps the company meet its goal of eliminating all greenhouse gas emissions from its supply chain by 2040.

Neither company said how much Walmart had agreed to pay for the vehicles, but Canoo said on an earnings call in May that its Lifestyle delivery vehicles had a target starting price of $34,750.

Wednesday’s filing shed a little more light on certain terms of the agreement between the two companies.

As part of the purchase agreement, Canoo issued Walmart a “warrant” to purchase 61.2 million shares of the company over 10 years at $2.15 per common share. This could give the retailer a stake of more than 20% in Canoo.

A stock warrant gives an investor the right to buy shares of a public company at a specific price and date, according to Investopedia.com. Warrants represent the future capital of the company issuing them.

Brian Yarbrough, a retail analyst at financial services firm Edward Jones, said a company with a warrant has the right to convert it into stock.

Walmart may choose to phase in the conversion, he said, buying perhaps 5% one year and another 5% a few years later.

“That doesn’t always mean you’ll convert them, but it just gives you the right to convert them into shares,” Yarbrough said.

If Canoo shares rise above $2.15, then it’s a good deal for Walmart, Yarbrough said. But if the stock tumbles, Walmart probably won’t exercise that option.

“The likelihood of them being depends on the success of the [issuing] company and how much the shares are worth at that time,” Yarbrough said.

The document also contains a proviso that while the agreement is in effect, Canoo may not do business with Amazon.com, its subsidiaries or affiliates.

No other company is named in the agreement.

Yarbrough said such arrangements don’t happen often, but can when one company takes a stake in another.

“Walmart says they’ve already taken a stake, we’re invested, and they say you have to own us and not supply rivals” with the same assets, Yarbrough said.

The company posted a net loss for the first quarter of this year, which ended March 31, of $125.4 million, compared to a net loss of $15.2 million in the same period a year earlier. early.

Canoo also operates in California and Texas and has over 940 employees.

Canoo has said since November it was moving its headquarters and some production to Walmart’s hometown of Bentonville. However, Canoo has not yet revealed the address or size of the Bentonville facility.