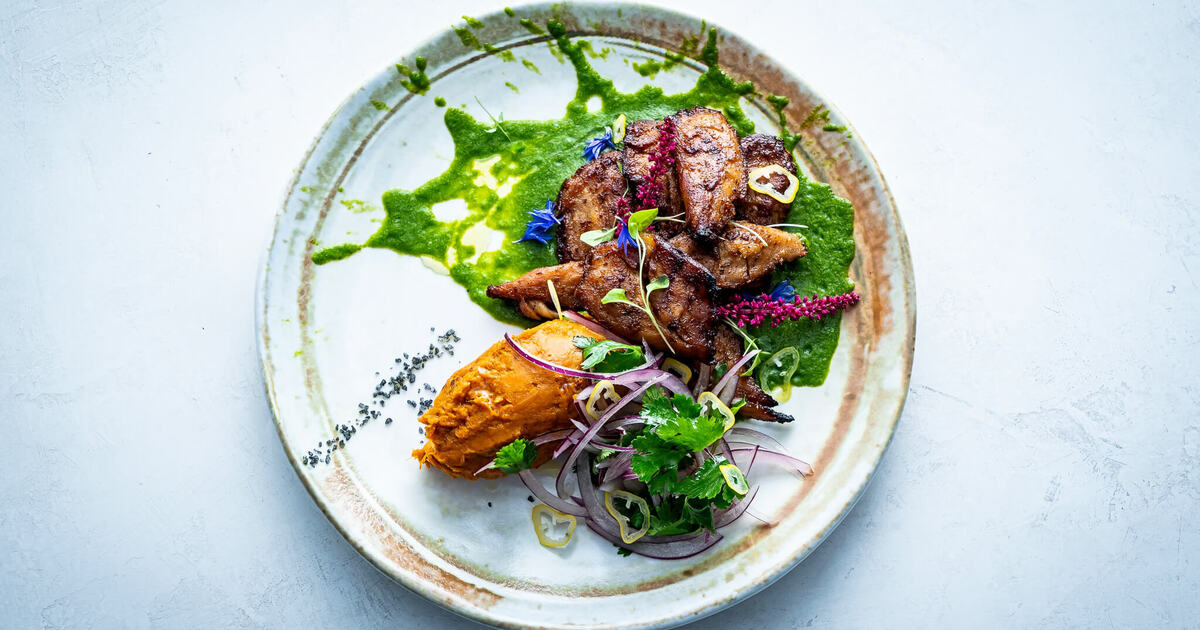 A succulent chicken, in the center of the plate, made without harming animals or the environment? A new offering made by vegan brand Daring Foods in partnership with Cuisine Solutions aims to offer just that. Cuisine Solutions is a world leader in the technique of sous vide cooking, a style of French cooking meaning “sous vide” where food is sealed and cooked slowly to bring out nuanced flavor and succulent texture.

“We are excited to partner with Cuisine Solutions, Inc. to bring a sous vide format to our partner restaurants and for the opportunity to expand this new offering to other parts of the business in the future,” Ross Mackay, founder and CEO of Daring, said in a statement. “Taste and texture are at the forefront of everything we do, and we trust the sous vide format to produce both to the highest quality.”

Daring is endorsed by celebrities such as Drake and Naomi Osaka and its latest marketing campaign was done in partnership with Kourtney Kardashian Barker and her husband Travis Barker. Its vegan chicken products are currently available at 11,000 retail stores, including Target, Walmart and Kroger.

Daring Foods is a mission-driven, vegan company that aims to remove chickens from the food system. Since launching in 2017, the company has developed several products to mimic animal-based chicken, including cuts in Original, Lemon & Herb, Cajun, and Breaded varieties.

“The sous vide format offers our restaurant partners a new option not previously available: ready-to-eat,” David Johnson, vice president of food service at Daring, said in a statement. “Combining our simple ingredients with Cuisine Solutions’ sous vide technology gives our partners the consistency and quality they crave, while also opening the door to cooler applications.”

Daring’s Chicken Sous Vide recently launched at Juice Press, which added the Daring Plant-Based Chik’n Salad Wrap to its take-out section at 80 locations. In addition to providing consumers with a cruelty-free chicken option, the new format has other benefits for foodservice providers, such as reduced labor costs, reduced preparation time and guaranteed consistency. of the product.

“Part of our goal in plant space innovation is to find the best companies in the market to partner with,” Nolan Popper, director of plant innovation at Cuisine Solutions, said in a statement.

“Combining Daring’s own ingredients with cutting-edge manufacturing technology means that together we can create endless platforms with options for every slice of the day,” Popper said. “We are excited about the possibilities our sous vide process has helped unlock for vegan and flexitarian customers.”

In addition to Daring, Eat Just also worked with Cuisine Solutions to release a sous vide version of its vegan JUST Egg last March. Sous Vide Egg Bites come in four globally inspired flavors and can be made in the oven, toaster or microwave.

Earlier this month, Starbucks vacuum-packed JUST Egg Bites and Daring’s Vegan Chicken on the menu at three locations in Washington, DC and Virginia, where the coffee chain is currently testing six plant-based options.

Vegan chicken for every meal

Daring has cracked the code for plant-based chicken, with its cuts and new sous vide format designed to closely resemble its animal-based counterparts.

Other brands such as Beyond Meat and Impossible Foods also make their own chicken products, which have found their way onto retail shelves and fast food menus from KFC to Panda Express to Burger King.

And even skinless chicken breasts — once touted as a health food — are getting the plant-based treatment. Last month, Swiss company Planted Foods raised $72 million in venture capital to expand its plant-based meat business, with a particular focus on whole cuts of meat such as skinless chicken breasts. Planted uses yellow pea protein and a process called “biostructuring” to produce its minimally processed vegan meats, which start with plant-extracted protein and stretch out through wet extrusion before going through a fermentation process.

Planted’s vegan chicken breasts are already on the menu at Tim Raue, a two-star Michelin restaurant in Berlin, and are expected to expand to other restaurants before hitting stores later this year.

For the latest vegan news, read:

Anna Starostinetskaya is the editor-in-chief of VegNews and always keeps tabs on all things vegan in her hometown of San Francisco, California, and everywhere else.

Bars and nightclubs can now expand their footprint in sidewalk cafes