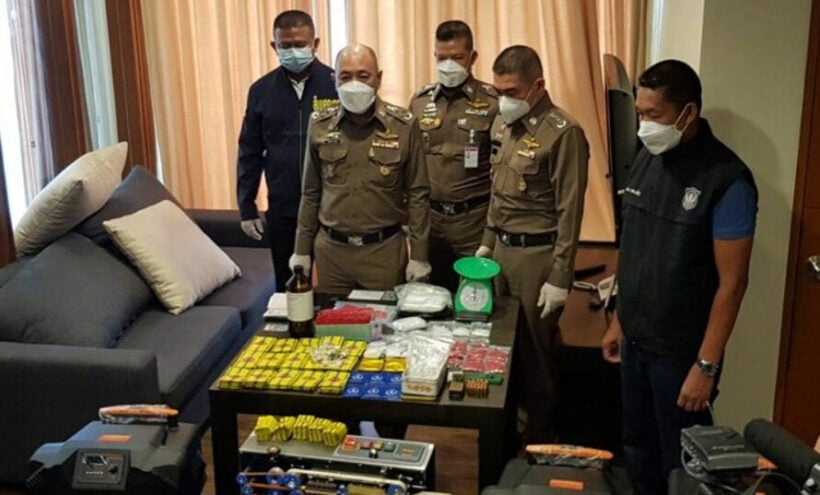 bangkok the police arrested two men from Singapore yesterday for allegedly producing a drug known as “happy water‘ and sell it to entertainment venues around the capital.

Happy Water is made by mixing various drugs with sugary drinks. The drug cocktail is not for the faint-hearted: it usually contains ecstasy, methamphetamine, caffeine, diazepam and tramadol all rolled into one.

Hundreds of revelers in Jinling were arrested in the raid, with 104 of them testing positive for drugs. A total of 99 people who tested positive were Chinese nationals.

Inside the apartment, officers found the Happy Water formula – in the same packaging as the Happy Water found inside Jinling. Police arrested Lo Jing Ang and Ong Chao Xiang and seized the drugs as well as the loudspeakers the defendants used to smuggle Happy Water into entertainment venues. Firearms and ammunition were also seized.

The men confessed to smuggling drugs into northeast Thailand from neighboring countries by hiding them in loudspeakers. Then they brought the drugs to “three or four” condos in Bangkok. The men admitted to mixing the drugs and distributing them at entertainment venues. However, they neither admitted nor denied selling Happy Water to Jinling Pub.

According to the police, Lo Jin Ang entered Thailand illegally almost 20 years ago. Over the years, Thai people have helped him rent accommodation and helped him get around and go unnoticed by the authorities. He never had a real profession in Thailand and has no relatives here, police said.

Regarding the Jinling drug raid, a police chief was removed from his post (a kind of slap on the wrist for the criminal police) for allegedly accepting bribes and allowing the nightclub to open and operate illegally. The place belonged to a Chinese national.

The defendants face a heavy prison sentence in Thailand for their crimes. However, it will be much worse for them if they are extradited to Singapore for trial, where drug trafficking is a crime punishable by death.

What do you need to know about mortgage loans?