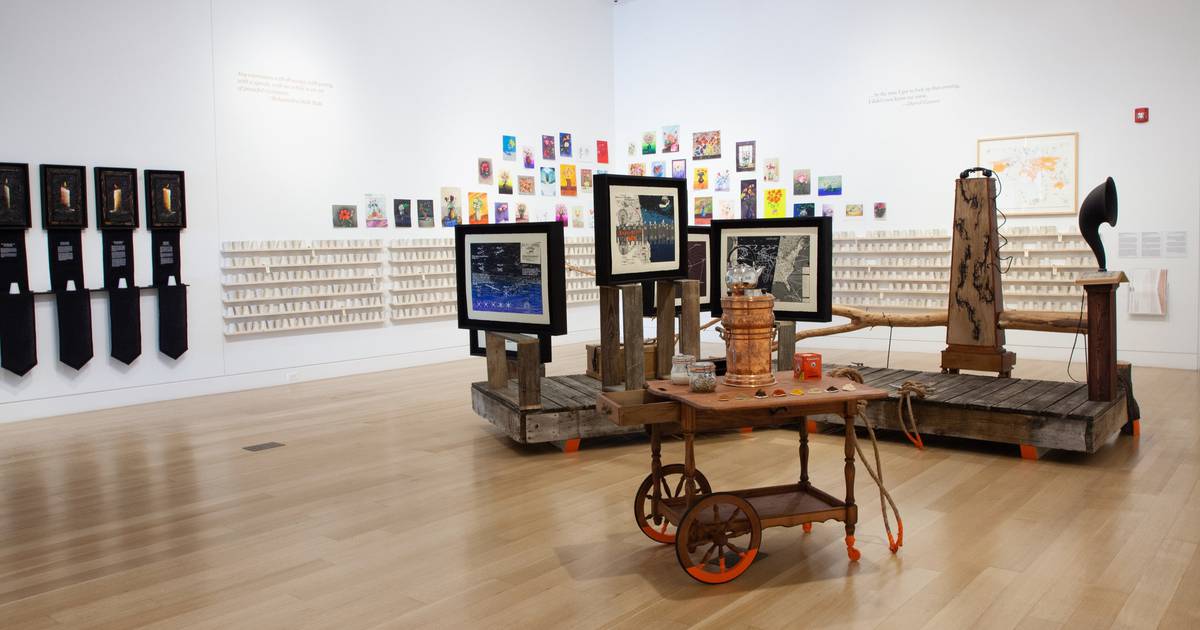 Mamdouh poses alone in a garbage-filled square in his Egyptian hometown; Murat in a cluster of mint-green shipping containers that serve as a refugee housing complex in Germany; Rustam in the central hall of a prison-turned-museum in Ireland. Unusual for portrait subjects, their backs are turned towards the camera. But portraits, at least profound, are never more than a matter of likeness, and these men, released from Guantanamo after being held for years without charge, still seem scarred by the US military’s rule against photographing faces of imprisoned people.

These images belong to “Beyond Gitmo,” a haunting series by Debi Cornwall that is part of “Remaking the Exceptional: Tea, Torture & Reparations | Chicago to Guantánamo,” an ambitious group exhibition at the DePaul Art Museum that is both infuriating , heartbreaking and full of humanity. It is no coincidence that the show opened this year: 2022 marks the 20th anniversary of the opening of the extralegal military prison established by the US government at its Guantanamo Bay naval base, in Cuba, as part of the global war on terrorism. Meanwhile, the Chicago Police Department is the other institution examined for repeated human rights violations. In both places, it is mainly bodies blacks and minorities who are at stake and white bodies in control.

“Redoing the exceptional” continually oscillates between Chicago and Guantanamo. It includes the work of some twenty individuals and collectives: artist Trevor Paglen, who took the only known photograph of Salt Pit, a secret CIA prison in Afghanistan; activist Sarah-Ji Rhee, who has been documenting local freedom struggles since 2010; the Chicago Torture Justice Memorials group; Gitmo inmates past and present; and inmates at Stateville Correctional Center in Crest Hill, where the Prison + Neighborhood Arts/Education Project has been conducting classes for more than a decade. The art here is documentary, conceptual, legalistic, therapeutic, figurative, commemorative and visionary. That’s all it takes and much of it – like the fight for justice – is ongoing.

The show opens with a sort of navigation map: an impression of rippling water covered with a constellation of eight linked names. Four survived torture at the hands of Chicago police; four at Guantanamo. What could they have to say to each other, across the oceans that separate them and that have so long symbolized freedom? A podcast created for the exhibition brings together their individual interviews in an imaginary conversation about the prison state and the possibilities of reparation, just as the exhibition itself facilitates such a rapport between the works of art.

These Cornwall portraits are joined by others, ceiling-hanging effigies quilted by Dorothy Burge of CPD torture victims who remain incarcerated, that status visible in the vertically striped fabric that lines the men’s faces like so many bars from prison. An eight-foot-long black banner details a speculative redress order for survivors of police abuse made real when it was approved by the Chicago City Council in 2015; a second banner imagines the same for Guantanamo detainees, whose jumpsuits spawn its bright orange.

Shelves display rough sketches by Darrell Cannon and Abu Zubaydah of brutal acts they were forced to endure while in the custody of CPD officers and Guantanamo guards, respectively. “Coordinates of Terror,” an interactive map from the Invisible Institute, concretely connects torture techniques used during the war to those employed by notorious CPD officers like former commander and Vietnam veteran Jon Burge and Detective Richard Zuley , a principal interrogator at Gitmo for two years. The implications are clear and horrifying.

The heart of “Remaking the Exceptional” is the Tea Project, an initiative of Amber Ginsburg and Aaron Hughes, who also co-organized the exhibition. Their ‘Ode to the Sea’, a vast wooden dock in the main gallery, includes an array of items to help a visitor find moorings in dangerous waters: maps to navigate between violence and injustice, a “torture tree” in the form of nail-studded driftwood, a lighthouse containing parts of a torture device, a phonograph horn playing the voices of survivors. The longest of their collaborations was a series of cast porcelain teacups, one for each of the 780 men imprisoned at Guantanamo (37 remain today, of whom only 2 have been convicted). Each mug bears the name and nationality of an inmate and is decorated with that country’s flower. Inspired by stories of how inmates would engrave their polystyrene cups with designs and poems, the containers sit quietly, endlessly, on wooden shelves that line the walls of the main gallery.

Above the rows and rows of teacups hangs a group of artworks made inside Guantanamo: 48 paintings and drawings of flowers, one for each of the countries whose citizens have been imprisoned. The effect is condolence cards or hospital art, offered with the sincere hope of comforting those in pain. It’s one of the few collections of inmate art on display here – there are also ships at sea, empty tea sets, dead or wintering trees – whose themes speak movingly and metaphorically of life. interior of an indefinitely confined person.

All of these images – plus a rare sculpture by Khalid Qasim, a depiction of the tools of knowledge ingeniously constructed from limited supplies: wood, coffee, cream, paint and cardboard – predate a 2017 decision by the Ministry of Defense to no longer allow art to leave the island. This does not pose a traditional security risk: it threatens to humanize those who remain locked up. What is art other than the proof that a being continues to think, to feel, to imagine and to resist, despite the most cruel treatment it has undergone?