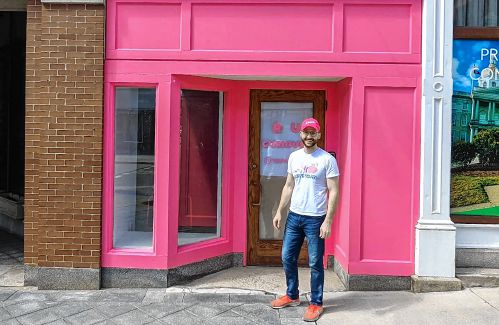 There’s no sign on the storefront yet, but you don’t really need one to spot Main Street’s newest future restaurant in Concord.

Teatotaller, a Somersworth cafe that describes itself as “an oasis of queer, hipster, tea, coffee and baking delights,” is preparing to open its downtown Concord branch in about a month after a long pandemic delay. It recruits for all cafe and bakery positions, which the website promises is “fun, friendly and fabulous” mixing bubble teas and other specialties with “drag shows to die for”. .

In preparation, this week he transformed the storefront a shocking pink.

“We’re going to be even bolder – higher saturation – at Concord,” said owner Emmett Soldati. “We have two local muralists to design the interior…and have custom furniture made.”

The store is in Concord’s central business performance district, which has a review process where an architectural design committee reviews proposed changes. Despite the telling change Teatotaller made, because it just involved painting and didn’t need a building permit, no city approval was needed.

The LGBTQ-friendly cafe has been in Somersworth since 2016. The business was preparing to open a second cafe on Warren Street in the spring of 2019 before COVID-19 got in the way. Since then, the edible arrangements at 2 Capital Plaza have closed, providing an opening to access Main Street.

The new space will offer sit-down and counter service and takeout, including outdoor seating, Soldati said. It will offer much the same menu as the Somersworth store.

The city has approved the cafe sign, which will soon be installed. The actual opening date has not been set, but late May or June seems likely, Soldati said.

Soldati ran for the Democratic nomination for the District 2 Executive Council seat in 2020. His father, Lincoln Soldati, was once mayor of Somersworth.

May breaks silence on nightclub incident