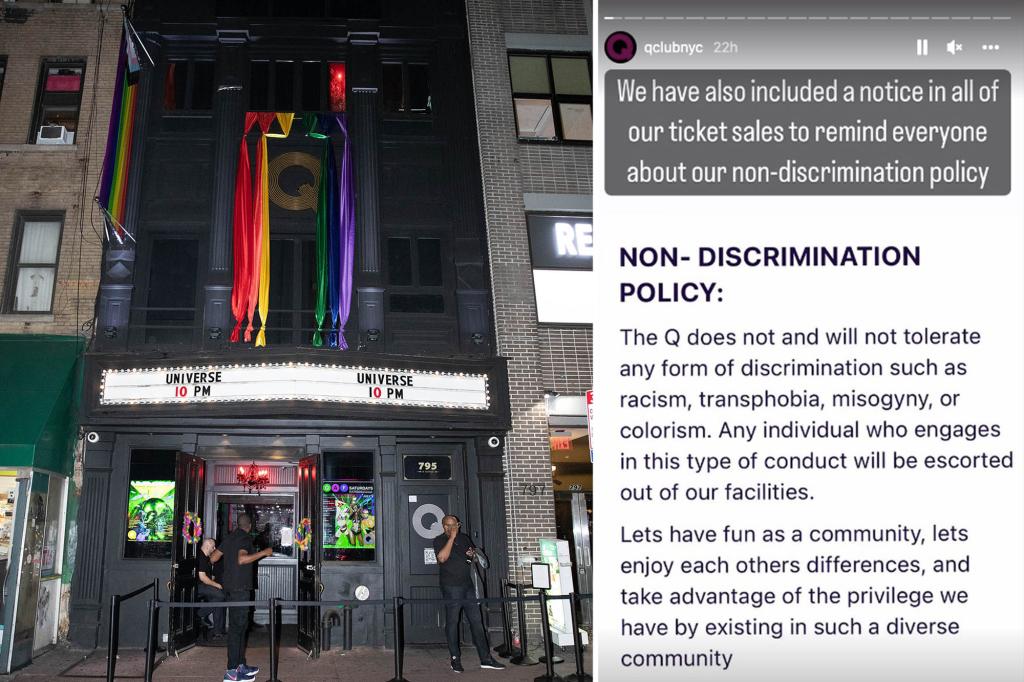 A celebrity-backed gay nightclub in Hell’s Kitchen has engaged in racist and sexist entry policies, catering to underage drinkers and turned a blind eye to illegal drugs, including GHB, a “date rape” drug, according to a new lawsuit.

The Q, which opened in 2021 on Eighth Avenue and 48th Street, was supposed to trumpet ‘inclusivity’, but partner Alan Pikus ‘expressed his discriminatory beliefs and was hostile to the club addressing to any group other than young white males. former partner Frank “Frankie” Sharp alleged in the lawsuit that was filed last month in Manhattan State Supreme Court.

Sharp, nightlife producer and public face of the club, says in the suit that he worked to design and launch the four-story venue which features a mix of live music, cocktails and a dance floor . Actors Charlie Carver and Zachary Quinto are among its investors, and Billy Porter has helped promote it.

In addition to Pikus, also known as Alan Picus and nightclub promoter, his partner Bob Fluet, founder of the Boxers NYC bar chain, is named in the lawsuit.

The Q was quickly popular with customers, but immediately rattled neighbors who filed noise complaints, according to the lawsuit, which alleged that Pikus would turn up the speaker volume if someone turned it down.

Pikus was also hostile to the club’s popular Latin parties, telling Sharp, “Make sure your Latin parties are the right kind of Latins, not Blatinos,” using slang for someone of mixed race, according to reports. court documents.

Pikus wanted the venue to be “comfortable for white twinks,” or young gay white men, according to the lawsuit. He wanted women off limits and made a disparaging remark to a would-be bar manager, saying, “I don’t need [you] breaking my back to hire people just because they are black or trans,” court documents allege.

The club has earned a reputation as ‘the place to go for minors’, according to court documents.

And Pikus “ordered” security to stop interdicting illegal drugs and when they didn’t comply he said he would read the “riot act” to the director of security for “removing our boys’ GHB,” the lawsuit alleges. The so-called club drug is known to lower inhibitions and to be slipped into drinks to render a victim unable to resist sexual assault.

Pikus also allegedly had sex in public with club patrons, often near workers and “sometimes next to them,” according to the lawsuit.

When he told Fluet about the workers’ complaints in April 2022 with a video to back them up, he was given an ultimatum to resign with a small payout or possibly face dismissal, Sharp argued in his lawsuit.

Sharp said he was fired on May 23.

“I was shown the door BECAUSE of my REPEATED attempts to address the problematic behavior and dangerous mishandling of the Q…. All I seek in this claim is justice and I REFUSE to be intimidated “, Sharp said on his Facebook page.

Thomas Shanahan, an attorney for Pikus, said “allegations of inappropriate, racially insensitive and discriminatory comments were taken out of context.”

Pikus denied making the remarks about Latinos, white ‘twinks’, trans people and that he hadn’t had sex in the club or allowed us to be illegally drugged or underage drunk, added Shanahan.

The Q announced on his Instagram page this week that Pikus was no longer affiliated with it and donated $10,000 to Destination Tomorrow, a Bronx nonprofit serving the LGBTQ+ community.

Fluet on Instagram said “While we vehemently deny the hurtful allegations that have recently surfaced, we are committed to ending the very division within our community that Q’s programming and mission were designed to combat.”

Representatives for Carver, Quinto and Porter did not return requests for comment.