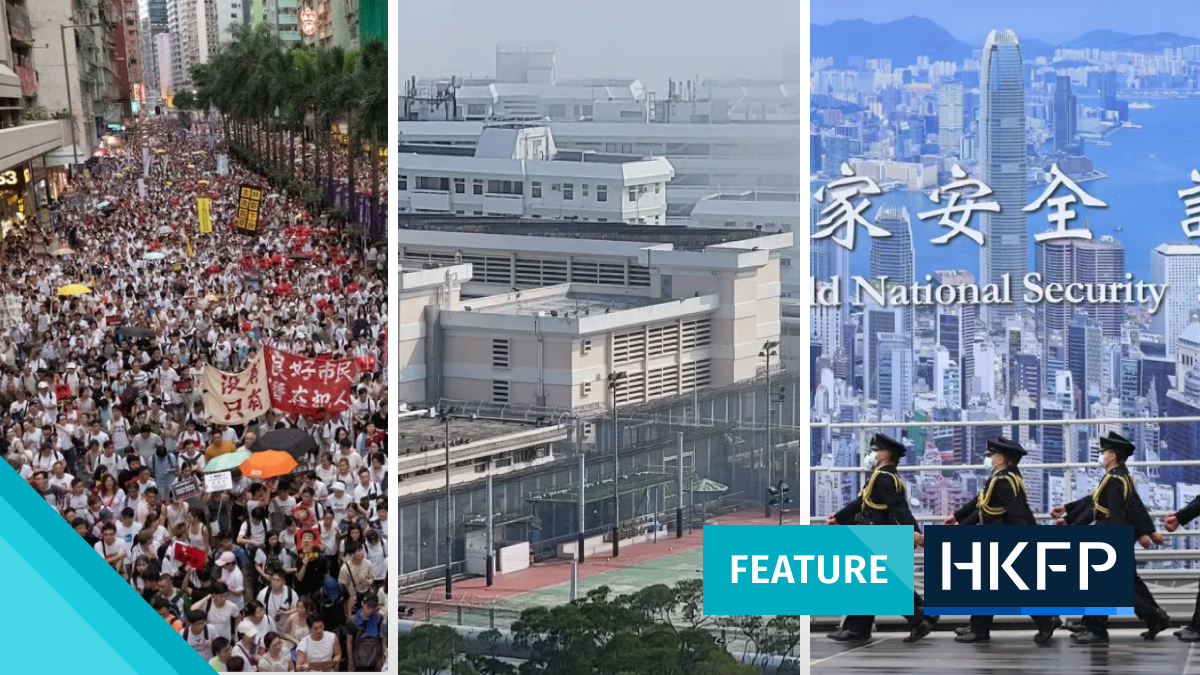 When Tung Sheung-Lam left Shek Pik prison last month after two years and eight months behind bars, he did not expect a welcome party.

But the 23-year-old was surprised by his parents, who picked him up and took him to a yum cha restaurant, followed by a hotel stay. Now he has time to reflect on his time behind bars.

Tung was arrested in October 2019 for possessing and manufacturing explosives at an apartment in Tai Kok Tsui, where police found potassium nitrate, Molotov cocktails and modified drones.

He was convicted in September 2021 of three counts and sentenced to 48 months in prison, but was released in July after his pre-trial detention was considered.

Prior to his arrest, Tung was a college student, with occasional part-time gigs as a salesman. He even joined student organizations at his community college. As the summer of 2019 approached, Tung quickly found himself fully committed to the democratic cause.

After his first taste of tear gas, he became a full-time protester, which led to his fateful decision and imprisonment.

Looking back, Tung views his incarceration and sudden transition to freedom as a surreal experience. But overall, he doesn’t view his time behind bars as a waste of time.

“Like everything else in life, there should be no regrets. I might even go back the same way since the people and experiences I met made me who I am now,” Tung said, adding that he had no intention of breaking the law.

He was among thousands of young people detained during months of sometimes violent protests. A total of 10,265 people were arrested for various reasons. Of the 2,684 people charged, 1,197 people were convicted, according to figures from the Security Bureau.

The judiciary still handles many cases.

Once released from prison, many former protesters face a city very different from the one they left behind. Since Beijing imposed the National Security Law in June 2020 – which criminalized subversion, secession, collusion with foreign forces and terrorist acts – traces of the protests have been virtually erased, and authorities say it has restored stability and peace in the city.

Many pro-democracy activists and politicians face charges or are already in jail. Others fell silent or fled abroad.

Following the enactment of security legislation, the political system was overhauled to provide a pro-Beijing narrative in the form of a “patriots-only” legislature. These changes have also had an impact on the younger generation.

For those behind bars, the Directorate of Corrections has set up a voluntary “de-radicalisation” program for young people incarcerated for offenses related to the demonstration. The program includes safety law education to promote “law abiding awareness”, in hopes of reducing the risk of recidivism by teaching Chinese history and traditional values.

While in prison, Tung volunteered to write a passage for the Department of Corrections’ annual report on “Family Values ​​and Chinese Culture.” He said he kept the wording as neutral as possible and that his decision was a bargaining ploy. “When you’re alone, or have other people inside to keep you busy, you do what you need to do,” he said.

When Chinese leader Xi Jinping visited the city to attend the 25th anniversary celebrations of Hong Kong’s handover from Britain to China, he extended an olive branch to Hong Kong’s youth. In a speech, Xi said Hong Kong “will only have a bright future when its young people have good career prospects” and urged authorities to prevent juvenile delinquency.

In turn, Police Commissioner Raymond Siu said society should offer hope and a “second chance” to convicted protesters, saying many had shown remorse.

Some ex-protesters consider the olive branch offered insincere and say they are still stigmatized by society. A 23-year-old named Ding who was released from prison two years ago told HKFP that he could not open any bank accounts until very recently. No reason was given to him.

Ding, who asked to remain anonymous, said he believed “second chances” came not from the establishment but mainly from businesses sympathetic to their situation. He recalled receiving fliers promoting the national security law but didn’t give it much thought.

“They always labeled us…even before the protests, we would have been called ‘political prisoners,'” Ding said. “At least I know I broke the law not because I’m a criminal.”

Like Tung, Ding remains optimistic about life beyond bars despite his criminal record. Ding, who has since returned to school, opened a Patreon page to share his views on Hong Kong and hopes to write a book one day.

“The whole experience feels like a dream, but it is what it is. We have to accept that, do everything we can and influence the people around us,” he said.

For some, however, prison has brought its share of demons. A 20-year-old protester who used the pseudonym Sleep recalled witnessing occasional inmate clashes at Pik Uk Correctional Facility.

Sleep told HKFP that some former protesters imprisoned there have moved closer to guards or triad members incarcerated in the same cell for protection, which he described as the “easy way out”.

“While some fellow inmates bonded more easily with me, you were mostly alone, and not everyone is benign, so you have to take care of yourself,” Sleep said.

Sleep was not alone. What upset Tung the most were the occasional betrayals of his supposed comrades behind bars in an environment fueled by survival anxiety. Witch hunts against “ghosts” — those suspected of secretly working with authorities or sabotaging the movement — could occur among protesters at any time, Tung said.

“A misconception is that the people inside are adamant about the cause – the reality is the opposite. There is no heroism, and the people inside just wanted out. We had to watch our rear – not from the authorities but in our ranks,” he said.

Even as a veteran protester arrested during the 2014 Umbrella Movement, jail can be an upsetting experience.

“The scariest thing about life in prison is that it completely changes a person without them realizing it. I started reading, training and studying, and to fight for myself,” Tung said.

While in detention, Tung met Tong Ying-Kit, the first person to be tried and convicted under the National Security Law. They quickly became friends and watched each other as they transferred to various institutions.

Tong Ying-Kit was found guilty of terrorism and inciting secession by a panel of appointed judges instead of a jury, a first in Hong Kong’s legal history.

A handwritten letter from Tong to Tung, seen by HKFP, depicts his bewilderment over the nine-year sentence under the national security law. Since his release, Tung has paid close attention to his friend behind bars and has spoken out for him.

Additionally, Tung and other former protesters are currently working on a mobile game that depicts a battle between gods and humans that is devastating civilization. In the game, Hong Kong escapes this fate but extends authoritarian rule over the survivors and becomes a target of resistance.

The game remains at a rudimentary stage since the friends he recruited as programmers are still behind bars. He sees it as a long-term project.

“Someone has to do it. It’s nothing noble, but if you’re in this position, it’s your responsibility.