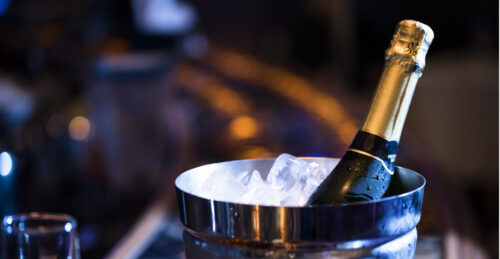 If you’re planning on hitting a nightclub or bar this weekend, you might be in for some good old-fashioned beer, as high-end liquor options might be in short supply in Vancouver.

Although the impacts have been felt the hardest by the cannabis sector, supply issues could impact operations in venues such as high-end bars and nightclubs as early as this weekend.

Daily Hive spoke to Jeff Guinard of the Alliance of Beverage Licensees (ABLE BC) in British Columbia, who says the group is already seeing big holes in the shelves.

Guinard suggests that products like premium vodka and champagne are hard to come by, which is a huge deal for places like nightclubs. He thinks the situation is similar for bars.

“They will have to steer people towards beer,” Guinard told The Daily Hive.

Otherwise, these people will just have to find other things to do instead of heading to higher-end alcohol options, which will have a huge impact on the business of these Vancouver sites and probably other establishments of the province.

Guinard fears that things will get really bad if the industrial action extends beyond the next Labor Day, but due to a media blackout, the BC government and the BCGEU are not speaking out. not publicly on the matter.

We spoke to Ritish Maisuria, a local promoter of events at venues like nightclubs.

“It’s difficult because some of our managers go to three or four different liquor stores every day to try to find what’s left. And for a club like ours, where people are used to high-end brands, eventually we will have to sell them off-brand alcohol. We haven’t had to do that yet,” Maisuria said.

He added that if the strike does not end soon, that will definitely be a problem.

Daily Hive also heard from Ian Tostensen of the BC Restaurant and Foodservices Association. Things are looking a bit more optimistic for restaurants at the moment.

“We’ll have enough product to get through one way or another,” Tostensen said.

“I think the moment of truth will definitely come next week.”

He added that supplies are not replenished and the middle of next week will start to be a problem.

On the BCGEU side, the most recent update of the union is that it has accepted the BC government’s offer to return to the bargaining table, with the logistics still being confirmed.