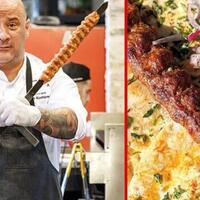 A Turk said he sells some 400 Adana kebabs a day at his Miami restaurant, which entered the Michelin Guide in its first year.

“Our restaurant, Doya, was opened a year ago and we managed to enter the Michelin list with Turkish food,” said Erhan Köspeten.

Köspeten, who is the son of former transport minister Mehmet Köspeten, has lived in Miami, United States, since 2004.

Doya is his second restaurant after Mandolin Aegean Bistro, which was sold to Soho House.

“We promote Turkish cuisine in the United States,” he said. “We have baklava, kebabs, lahmacun, pitta, mantı and mezes on the menu.”

When asked what his customers prefer the most, Köspeten directly pointed to Adana kebab. “We sell about 400 Adana kebabs a day,” he said, adding customers’ interest in the “cağ kebab.”

Adana kebab is a Turkish dish that consists of a long skewer of hand-minced meat mounted on a wide iron skewer and grilled on an open barbecue filled with hot charcoal. The dish originated in the southern province of Adana.

Cağ kebab is a variety of horizontally stacked marinated lamb kebab, originating from the eastern province of Erzurum.

The owner of Doya aims to form Doya chains of 10 restaurants over the next five years. “Our second Doya will be open in Doral, near Miami,” he said.

Monaco, Shanghai and New Mexico are other destinations where Köspeten plans to open new Doya chains.

When asked if the Turkish brand will open in Türkiye, he said: “We haven’t decided yet. But if we make such a decision one day, it will surely be in Istanbul.

6 Costa Rican cafes perfect for a weekend brunch in Heredia: